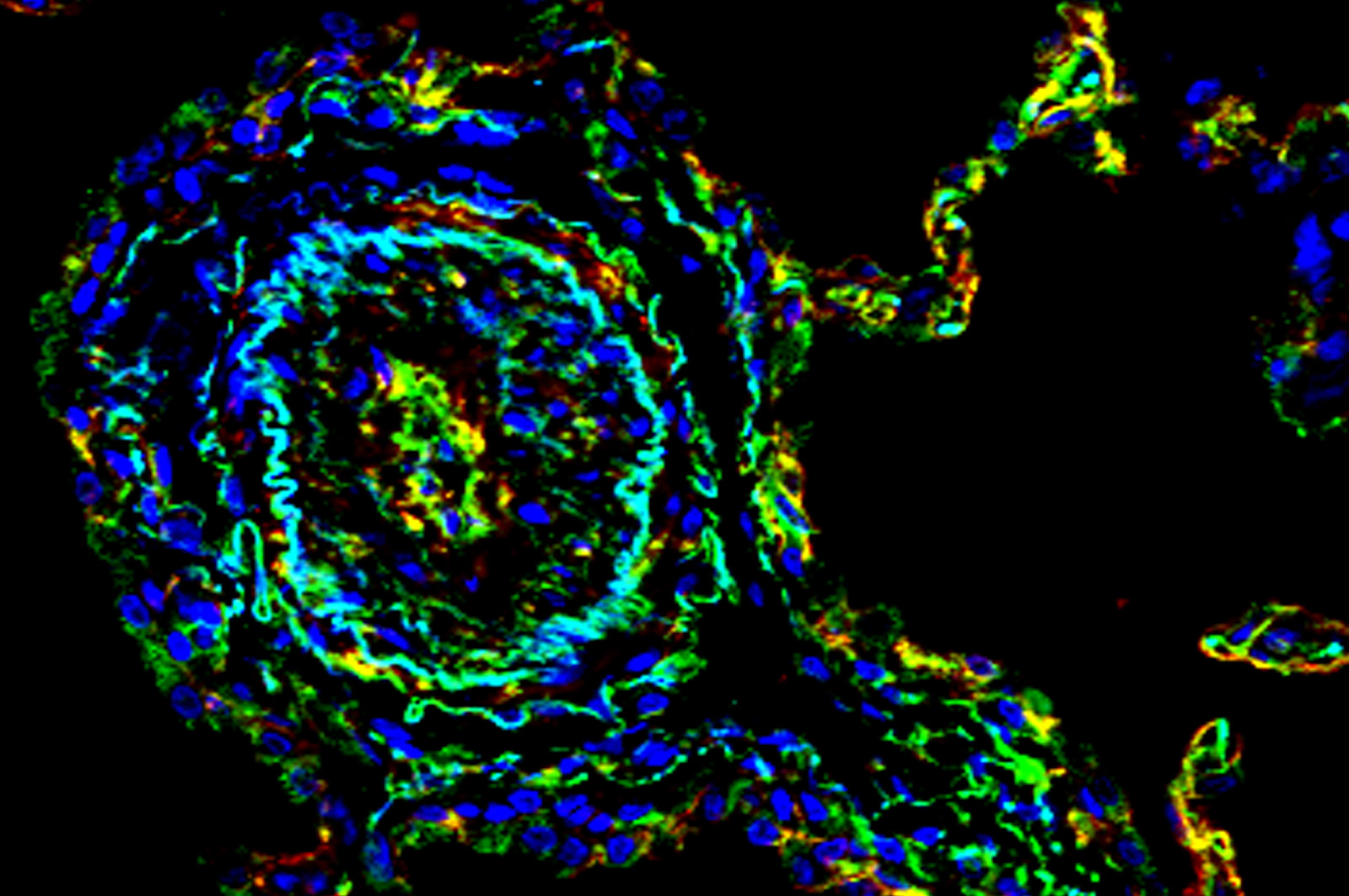 Murine plasma extracellular vesicles were isolated and loaded into a Nanoparticle Analyzer (Nanosight) for quantification of particle concentration and size.

Pulmonary Vascular Diseases, especially Pulmonary Arterial Hypertension (PAH), have been the focus of our research effort. PAH is a life-threatening disease with no cure, characterized by hyperproliferation of vascular cells, including endothelial cells. The hyperproliferation of vascular cells eventually obstructs the lung vasculature leading to irreversible lesions that collectively drive up the pulmonary pressure to life-threatening levels. Although the primary cause of non-infectious PAH is not fully understood, several studies indicate it results from chronic pulmonary inflammation. Curiously, infection by the parasite Schistosoma mansoni recapitulates aspects of widespread pulmonary inflammation that lead to PAH, providing a unique model where molecular alterations leading to vascular cell hyperproliferation can be unraveled and hopefully leveraged for the development of clinical solutions for PAH.

Schistosomiasis-associated PAH evolves in response to S. mansoni egg-associated obliteration and remodeling of the lung vasculature, which can lead to heart failure and death. Primarily, the parasites lay their eggs into the mesenteric circulation, which either cross the intestinal wall achieving the gut’s lumen, or allocate into other organs, such as the lungs and liver, increasing its pressure. Liver bypass via collateral circulation can alleviate the parasite-induced pressure in the portal system, but it also allows translocation of eggs, toxins, and antigens into the lungs, ultimately causing PAH. Understanding how these systems communicate is essential to uncover the onset and prevent progression of chronic diseases.

In collaboration with our peers, we have observed that sevoflurane, a gas widely used in general anesthesia, may serve as a protective agent during sepsis-induced inflammation and vascular injury. More specifically, we helped to identify that anethesics significantly induce the expression of inducible Nitric Oxide Synthase (iNOS) in macrophages and contribute to killing bacteria in the peritoneal cavity, helping to improve survival during sepsis-induced inflammation.  Sepsis affects millions of patients worldwide, including the United States, causing hundreds of thousands of deaths. Thus, it is important to determine the molecular mechanisms of this clinical condition to develop potential novel therapeutic approaches.

We have been awarded a K01 from the National Institutes of Health (NIH)!

Dr. Oliveira has been invited to be a social ambassador at the 2021 Vascular Discovery!